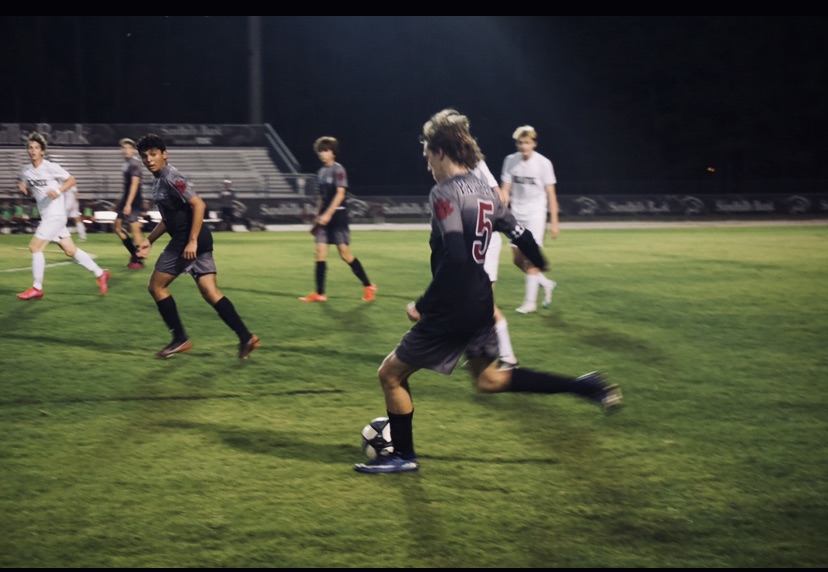 The CFHS Men’s Soccer team came into Friday night’s match against Socastee feeling confident after they had moved to 4-1 earlier in the week with a Region VI victory over West Florence. The Socastee Braves have been Region VI champions for the past 5 seasons in a row- and have not lost a single region game during that span. Most of the contests during those years had not been even been close. A much improved Panther squad, and a Braves team that lost several key seniors from the 2019 campaign brought much more intrigue to this year’s rivalry. Ultimately the Panther men would fall 1-0 to Socastee, but the evening was filled with drama, suspense, red cards, yellow cards- and a lot of rain.

Under a cloud of uncertainty- not just for CFHS, but for every high school in the state and the country- the Panthers took the field under fading light and beautiful weather. Recognizing that this *could* be the last game played for a while, both teams had high energy right from the opening kick. The Panthers have moved to a possession style this season, and were able to move the ball around from the back and march up and down the field throughout the match. This ball movement generated quite a few great chances during the first half, but due to some good goal keeping by the Braves, and shots going just over the crossbar and wide of the net, the home side could not convert. Socastee had really only two opportunities during the first half. On a counter attack their forwards were able to utilize excellent speed and get deep into the 18 yard box. The Panthers defense got a knock on the ball but did not clear it far enough- Socastee was able to go high against keeper Amos Uber and take a 1-0 lead. Late in the half came Socastee’s other opportunity from just outside the 18, but the shot went just over the crossbar.

During the halftime huddle down by the corner flag, the first few drops of rain came down. Both teams took the field for the 2nd frame, and the intensity of the rain picked up immediately. Within minutes of the opening 2nd half kickoff, the skies opened up and we were in a torrential downpour. Both teams kept up the intensity despite the conditions, recognizing how close the game was and how important this would be for the 2020 Region VI title race. The Panthers dominated possession during the 2nd half, and continued to generate chance after chance. In a mirror image of the first half, they just couldn’t find the back of the net. Late in the match a Socastee player was sent off with a red card (2nd yellow), and this allowed CFHS to play the rest of the way up a man. The final minutes of stoppage time saw opportunity after opportunity right at the Socastee goal, but no conversions. Socastee was able to hold on to the 1-0 margin and take the win on a wet night at Panther Stadium.

As of right now, no matches have been postponed or canceled. We expect to have additional details about potential changes on Monday. We’ll keep everyone updated through our official social media accounts (@cfhspanthers and @CarolinaForest3 on Twitter, and @carolinaforest3 on Instagram).

MAN OF THE MATCH: Junior midfielder/ attacker Leean Shitrit controlled the midfield for much of the match, and continuously moved the ball forward into scoring position for the Panthers. He also had several close scoring chances himself, including on the final play of the game where he was inches away from the late equalizer.

JUNIOR VARSITY: The JV opened the evening double header with a tight battle against the Socastee JV. Both teams fielded very young squads featuring many middle schoolers. The future looks bright for both programs based on the quality of play. Socastee was able to nick a goal in both halves to end the “good weather portion” of the evening with a 2-0 victory. Coach Brian Smith named Hermair Rayo as the “Man of the Match”- he played a consistent game throughout and really stepped up as a leader of this young club both on and off the field.

UP NEXT: Both teams of the CFHS Men’s Soccer program are scheduled to play at South Florence on Tuesday, and at Conway on Friday. If there are any changes to our schedule we’ll update through social media.