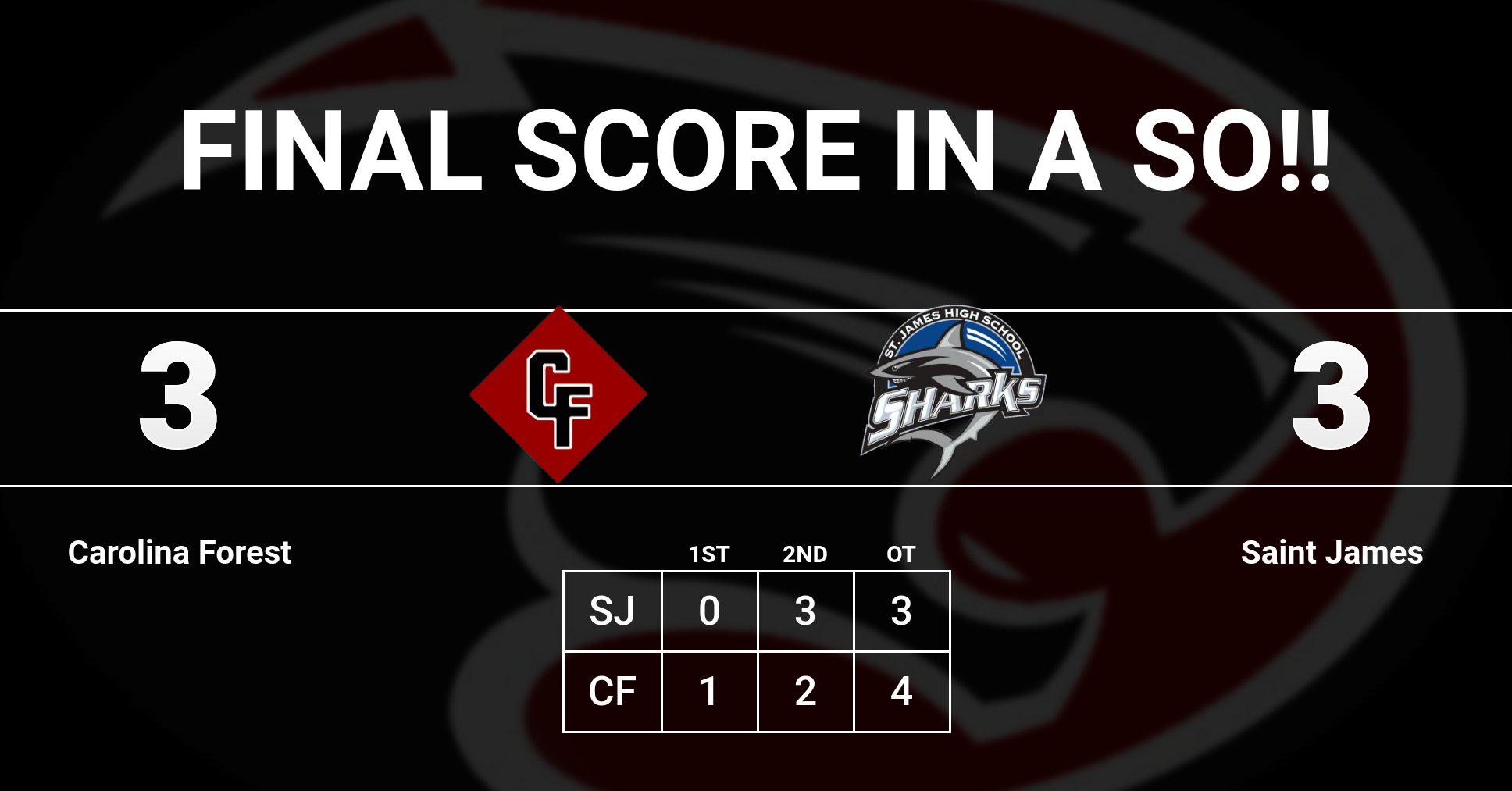 Last night’s match up was a good one from when the whistle blew! These are two of the top teams in the region so everyone knew this game would be a big one for both schools. The first half was a lot of back and forth between the two teams until Carolina Forest had a great break through. #5 Gianna Pavone played a great ball to #3 Lexi Lilly and she was able to get control and get it past the goalie for our first goal of the night! The halftime score was 1-0. To start the second half, everyone was on their toes and excited to play 40 more minutes of soccer. Carolina Forest was able to score the second goal within the first 10 minutes of the half. This goal was also scored by #3 Lexi Lilly assisted by #2 Reilly Ward. Now that we are up 2 – 0 this is when the game all changes in a heartbeat. St. James comes with everything they have and are able to cause some confusion in our midfield that leads to their first goal of the game. Now we have given St. James the momentum in this game and it will carry to their second goal scored just minutes after their first. Now we are all tied up 2 – 2 with about 25 minutes left to play. Time to forget about those goals and get back to work for the Panthers and they do just that. Carolina Forest is able to get some pressure on the St. James defense and #3 Lexi Lilly was driving towards the goal when she was fouled and was awarded a penalty kick. This is a lot of pressure but she was able to kick it right past the goalie. Now CF is up 3 – 2 with 15 minutes left to play. These last 15 minutes feel like forever and St. James amps up the pressure to try and get the tying goal. Which St. James is able to get goal #3 with about 2 minutes left in the game. Now we go into overtime which is two 5 minute periods. These 10 minutes seem to fly by and at the end of overtime we were still tied which means we go into penalty kicks. Now our defense has some injuries right now so other players are stepping up to play in those positions. Goalie #20 Rachel Durkin had a great game but for penalty kicks #14 Ally Niles stepped in to take on that challenge. St. James kicks first and they made their first PK. Carolina Forest’s #16 Angelina Bourcier goes next and makes hers as well. St. James misses their next two and so does Carolina Forest. St. James makes their next two PKs. To give them a total of 3 PKs made. Next up for Carolina Forest is #12 Gabby Giracello who makes her shot. Then last for CF was #10 Kacey Miller and she also makes her PK to give Carolina Forest a total of 3. We are still tied now it will go one vs one to see who will win. Their 6th shooter misses and out sixth shooter misses. Still tied. Their 7th shooter misses. Our 7th shooter is #17 Jesse Parrott who gets it into the back of the net! Carolina Forest Wins!! This was a game that the girls needed to fight their way through the entire night and they did just that!! We play St. James again Friday night!